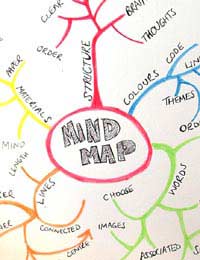 The concept of mindmapping and how it could be used to good effect in the motivation of people was formulated by a British psychologist called Tony Buzan as he was writing a book in 1971 called ‘An Encyclopaedia of the Brain’.

However, variations of mind maps had been used long before then. As he considered how people looked at information, he determined that people’s brains were more receptive to this kind of approach when it comes to clarifying thoughts, remembering things and that it helped with the creative process, decision making and keeping things in order all of which require self motivation.

Mindmapping, which is just one of many motivation techniques, is a way of establishing connections between concepts and ideas. You write down the central idea in the middle of a piece of paper then it’s a case of literally branching out in various directions with related ideas that are connected in some way to the central idea.

These ‘branches’ can also then become the basis upon which other ideas then branch off too into third tier ideas and the process continues. Unlike a whole page in list form where some people can simply become overwhelmed with page after page of text, others find that mindmapping with its use of colour, words underlined in bold, along with patterns and symbols can help to clarify thoughts and that it helps with motivation.

In What Areas Can Mindmapping Be Used?

Mindmapping can be a useful tool in all walks of life and can help with motivation. It is one of several motivation techniques used in business and if you’ve ever worked in an office based environment and gone on training courses, you’ll often see it used in brainstorming sessions using flip charts or a whiteboard where input from the audience helps to generate ideas as to how the mind map might be designed.

It is thought that mind maps are used in this way as they help to cement concepts and ideas more solidly than a list would and help with how people organise and store information in order to learn things. They’re often used in educational situations too. Frequently, you’ll see mindmapping being used in primary schools in interactive lessons as they’re often considered to be a better way of stimulating younger children who might sometimes display a lack of motivation into organising and storing information. Mindmapping can increase their motivation and learning ability. They can also help when it comes to revision time or when taking notes in lectures, for example. Because you’re using simple one word or phrase ideas and images and can see how it all fits together within the bigger picture. A lot of people find they are very useful motivation techniques in remembering things and we're all familiar with the lack of motivation revising can induce. Many people even use mindmapping for self motivation in their personal lives too and they’re often useful in helping people reach important decisions.

Let’s take an example of mindmapping which could help you in your personal life. It could be you’ve met somebody new and are considering entering into a relationship with them. Let’s call him Alan. You would write the name Alan in the middle of the page (perhaps draw a cloud or bubble around his name) and then you could draw separate branches from the centre which would consist of factors that make up your existing situation. So, you might have branches and sub branches that, in a mind map drawn version, might consist of something like the following:

However, just taking those two concepts of ‘passionate’ and ‘good career’, you may also be able to identify negative or selfish traits. So, sub branches might include the following too:

By brainstorming and by creating a mind map quickly from the first thoughts that enter your mind, the visual effect of the mind map can often help people to see the advantages and disadvantages of a situation quickly in order to generate the motivation to reach a decision.

Unlike when you formulate structured lists, mind maps are often more successful when you simply jot down connections without analysing them too much. In essence, you’re simply looking for intuitive connections that you’re making between concepts.

So whether it’s a decision you’re trying to reach, making your revision easier or trying to understand a new concept at work, mindmapping can be a useful tool and can often provide you with the motivation you need to get things done.

Being Assertive With Family or Friends