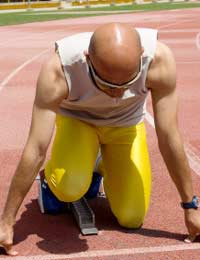 Even the best sportsmen and women in the world cannot expect to perform to their maximum capabilities all of the time. The great champions across all sports have to lose occasionally and they’ll simply view that as another motivation to try even harder next time. However, there are occasions whereby athletes can sometimes be overcome with nerves or excessive worry about their performance. This, in turn, can often affect them at the most crucial moments. They may be coasting to victory and in sight of the ‘winning post’ only to be beaten in the final outcome.

The term ‘choking’ is often used to describe this behaviour and the anxiety symptoms that accompany that and it basically describes a decrease in an athlete’s ability to be able to perform freely and to their maximum capabilities due to an inability to handle perceived stress or pressure. However, it’s always important to remember that this is only allowed to manifest itself if an athlete is unable to control their thoughts and emotions and there are ways of dealing with this in all sports.

Firstly, it’s important to recognise that anxiety in the form of nervous tension is perfectly normal in the few hours before you actually go out to compete. It’s necessary to have nervous energy in all sports and this should not be confused with fear. It is a natural part of your body preparing itself for competition. It’s always good to arrive at the venue in plenty of time so that your pre-competition preparations are not rushed which will only add to your stress.

Many athletes adopt pre-match rituals surrounding what they eat and at what time as well as having a particular order in the way they’ll get dressed and the type of final warm up exercises they’ll go through. Some will also use visualisation techniques picturing themselves scoring a goal or hitting a fantastic shot. Many sports psychologists endorse these kinds of mental exercises as it helps to put an athlete in a positive frame of mind. Alongside practising deep breathing and other relaxation techniques, they can help you to stave off anxiety symptoms such as a quickening heartbeat and clammy hands, for example.

The best way to avoid performance anxiety during competition is to ‘live in the moment’. So many performance jitters occur because an athlete will mentally overanalyse an error they’ve just made or they’ll be thinking too far ahead about the finish. By living in the moment, it will allow you to solely focus on what you’re going to do next. This should eliminate negative thoughts and maintain a positive attitude. If you find yourself harbouring such thoughts, take a moment to take a few deep breaths and then replace them with positive thoughts.

Don’t beat yourself up if you haven’t performed to your maximum capability. Any criticism, although it should be constructive, should be given by your coach or manager and whilst it’s important to listen to what they have to say and to seek advice from them if necessary, you should mentally focus on the things you did well, not be harsh on yourself for any errors you may have made. That’s part of sport and there’ll always be another day and other successes awaiting you just around the corner. After all, most champions would tell you that it was the lessons they learned in defeat and how they learned to bounce back from those occasions which is what made them the champions they are today.