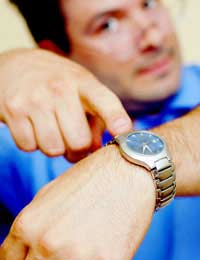 If we’re honest, most of us will own up to having the odd behavioural quirk or annoying habit. However, in work, it’s really important that we try to leave our bad habits at home.

Better still, get rid of them altogether. Whilst most people are tolerant of others’ behaviour most of the time, there are a number of common annoying habits which will irritate even the most mild-mannered colleague.

Most of us will have turned up late for work on occasion and come up with some pretty feeble excuse as to why. There are also those who might turn up for work at 9 o’clock ‘on the dot’ each day but who always take a little longer than they’re supposed to at break times or lunch times.

Being late regularly will not only irk your boss who, after all, is paying you to do a job for a particular length of time. It will also start to cause resentment amongst fellow colleagues who don’t take these liberties.

There is, of course, a difference between the odd occasion when you may be late due to unavoidable delays such as unusual traffic congestion, delayed public transport or sick children. However, if lateness becomes a habit, you’ll start to become unpopular.

Bad smells tend to fall into three broad categories. There are those who simply do not go to the trouble of considering their own personal hygiene. Whether it’s bad breath or sweaty armpits, there really is no excuse and whilst it’s not only an annoying habit, it can often be a difficult subject to broach which only exacerbates the situation.

At the other extreme, there are the bad smells caused by an over-indulgence of the perfume or after shave. Many workers have even pointed to this as a primary cause of suffering from headaches in the workplace. So, go easy on the amount you use.

Finally, another annoying habit is where a worker will sit and eat strong smelling food at their desk at break or lunch times. If your company permits eating at the desk, try to keep it limited to the plain old ham sandwich or something similar. Curries, for example, should be a ‘no-no’.

People who make too much noise are some of the most annoying people to have to work alongside. Excessive sounds caused by chewing gum, talking loudly on the phone, slurping drinks right next to a colleague or constantly tapping your fingernails or drumming your fingers on the desk are just some of the habits which will annoy fellow workers.

If you’re genuinely ill, don’t be a hero and come to work. This is especially true if you’ve got something like a common cold where you’re going to be wheezing, sneezing and coughing all of the time. At best, you’re simply going to annoy everyone whilst, at worst, you’re running the risk of putting fellow workers off work ill too which is going to be very annoying to them.

Whilst some people are more meticulous and well-organised than others in their personal lives at home, it can be extremely annoying if you’re a bit of a slob at work as this is likely to have an effect on your fellow workers too. This is especially true if you’re sharing a workspace and other facilities at work. Therefore, keep your desk and drawers tidy and free from cluttering up others’ workspaces and respect any shared bathroom, kitchen/dining and cloakroom facilities.

There are, no doubt, many more instances of common annoying work habits that you could come up with. The importance being that if you recognise anything in this article or it has prompted you to consider other habits you sometimes tend to display in the workplace, you should make every effort to stamp them out.

The Qualities of a Good Team Leader