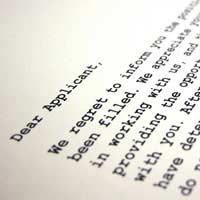 For many people, rejection isn’t a pleasant experience but everybody goes through it at some time or another. Life is often about taking risks. When we think about the concept of rejection, we’ll often associate it with things like job applications and the world of dating but rejection occurs in many other aspects of our lives too. You’ll probably know somebody who might be described as ‘thick-skinned’. Generally, this means that they’re less likely to be concerned about the consequences of coping with rejection but what is it that makes these people different from the rest of us? And, why do some people have a pathological fear of rejection? The answer usually lies in what kind of attitude we have towards rejection and those who accept it as a necessary part of life will usually fare better.

You’ll have probably heard the expression, "if you don’t buy a ticket, you can’t win the raffle” and it’s true, unless we take risks and expose ourselves to the possibility of rejection, we can never find our true path in life. Take the person who’s struggling to find a partner and wonders why all of their friends seem to be in happy relationships but they aren’t. Ask them how many people they’ve asked out lately and they’d probably have to think long and hard about that. It’s likely to be the fear of the feelings of rejection they think they'll experience that’s holding them back. Therefore, it’s important to take risks and to accept that rejection is part of life if you truly want to get what you want. Quite often, it’s simply a game of numbers.

Let’s look at job applications, for example. If you reply to 100 job advertisements, you’re going to receive far more responses in return than if you’d only replied to 50. That means more rejections for you to open. However, what you also must realise is that whilst you’ll need to deal with more rejections, you’ll also end up receiving more positive responses from companies who want to invite you to come in for an interview. Therefore, one of the best ways of coping with rejection is to simply view it as a game of numbers and focus on the end result. In other words, your goal in this instance is to get as many interviews as possible so just see the rejection letters amidst all of the responses as a by-product of that and something you need not concern yourself with.

Feelings of rejection can be painful but they’re only painful if you let them be. It’s not as though you’ve scalded yourself under a red hot tap is it? In other words, you’ve let rejection equal pain. Now, if you adopt a totally different mindset of not taking rejection personally, you’ll soon find that rejection doesn’t bother you anymore or, at least, that you’re able to shrug it off easier. Whether it’s a job you’d really like or that beautiful brunette you’ve had your eye on, rejection is rarely ever about you as an individual. It’s because the company or the person you’ve got the 'hots' for is perhaps looking for something or somebody else.

Let’s take dating, for example. Even if somebody has rejected you and they have been cruel enough to let it slip that they find you unattractive or even repulsive, does that make them right? No, not at all. Consider all the friendships you have. Would people want to be around you if you were repulsive? Hardly. In other words, don’t let one person’s opinion ruin your own feelings of self-esteem. Simply see every rejection as an opportunity to move on to something more exciting.

By adopting a healthy attitude towards being rejected and accepting that it’s a natural part of life and that we all go through it, you’ll start to view it as insignificant or some people often use it as a motivating force to drive them on to bigger and better things. The key is not to take it personally and to continue to strive for what you want to achieve in life.